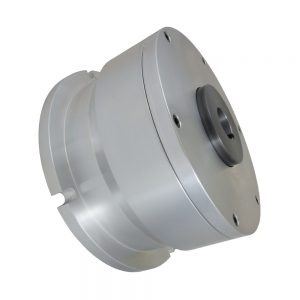 The motto of BouMatic, a Wisconsin manufacturer of automated cow milking systems, is Gently, Quickly and Completely. In keeping with Gently, BouMatic needed a solution to prevent unwanted rotation of their patented Exit Reel. When in a vertical position, the reel acts as a gate which retains the cows while they are connected to automated milking equipment. When milking is complete, the reel makes a 90-degree turn allowing the cows to move forward. The reel then slowly rotates an additional 90-degrees to prompt any stragglers to get going and make way for the next batch of cows.

Sometimes, however, one cow would want to moo-moo-move out of the milking stall more quickly and would push on the reel. That had the unfortunate result of rotating the reel too quickly resulting in the slower cows being bumped on their backsides by the reel. As any dairy farmer knows, an uncomfortable or anxious cow provides less milk. Boumatic first tried to use a hydraulic ram to solve the problem but, according to Anthony Esch, product manager of cow traffic systems, “Adjusting the flow controls for proper speed was difficult, and if air got into the hydraulic ram, it would throw off the braking of the reel.” The problem was presented to Techmaster, Inc., a distributor of Mach III brakes.

The brake selected to control the rotation of the reel was a standard B6F2G-STH. After a year of use, however, reports from the field indicated problems. The brakes were failing due to rust and contamination even though they were contained within an enclosure to protect them from frequent wash-downs of the milking parlor. There had also been instances where the cows were able to power through the brake to push the reel. The torque requirement had been approximated when the brake was originally selected, as there was no precise formula to calculate the amount of force an individual cow could apply to the reel.

The first step in solving these problems was a visit by Mach III staff to a Wisconsin dairy farm where the exit reel was in use. After gaining a better understanding of the environmental conditions and taking photos of some really adorable calves, they got to work on a new brake design. The corrosion problem was mitigated by a solid housing that completely shielded the brake’s internal components from contamination. The inadequate torque capacity was addressed by enlarging the piston and increasing the friction surfaces from 3 to 4.

Remarkably, Mach III increased the torque by 88% and enclosed the brake while maintaining the footprint of the standard model. This allowed easy retrofit of systems already in use and eliminated any need for BouMatic to redesign the cabinet that houses the brake. The most remarkable feature, however, was the cost. The price of the new brake design was only 10% more than the original.

The solution has kept the client and the cows happy since 2004.