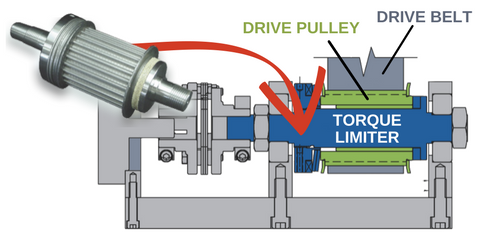 In a perfect world, the need for overload protection in the drive train is foreseen and accommodated in the original design. But in the real world, the overload problem can arise after equipment has gone into use. At that point, there are multiple problems:

This occurred when an arm used to position components during the assembly of an aircraft had problems with overload when it went into use.

The arm held a panel as it was attached to the wing assembly. This arm was articulated by a timing belt pulley located in the pivot point. The pulley was driven by a belt connected to a motor. Anytime extra load was put on the panel, it transferred back through the drive-train to the motor.

A torque limiter would resolve the issue, but there was only one inch of axial space available between the pulley and frame in which it could be placed. Nothing existed that was 1.0 inch wide that could deliver the required torque. It appeared redesign and rebuilding of the arm might be the only option, one which would be both time consuming and costly.

Mach III proposed a design that integrated the timing belt pulley into the torque limiter. With a torque setting of 530 pound inches, any load exceeding this amount causes the drive surfaces (the end plate of the torque limiter and face of the pulley) to slip against the friction surface. This slipping continues until the overload ceases, preventing the transfer of the excessive load from the shaft of the torque limiter to the pulley.

This design made retrofit as simple as possible since nothing had to be moved. Even the belt position was maintained. Mach III expedited production to keep the OEM arm out of hot water with their client. Only 12 days after the application was presented to Mach III, 5 complete torque limiter/pulley assemblies arrived onsite.